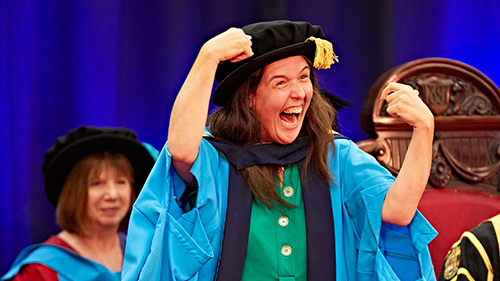 Taking what you discover at university onto a bigger stage was the theme for recipients of honorary doctorates at the University of Huddersfield, which included comedian, writer and Huddersfield alumna Rosie Jones.

She collected her award on the final day of ceremonies, with Chinese film maker Bo Yang and business leader Paul Grimwood having also been honoured earlier in the week.

But it was Rosie who gave possibly the sagest and best-received piece of advice when she told her audience, “Never forget to have fun, go out and have a kebab!”

Sheffield-born former 3M CEO Sir George Buckley, who graduated from Huddersfield Polytechnic in the 1970s, was also installed as the University’s Chancellor.

Rosie has become one of the must-see acts on the UK comedy circuit in the decade since she graduated from the University of Huddersfield with a first-class honours BA in English Language and Creative Writing.

She has starred on shows including The Last Leg, Live at the Apollo, The Jonathan Ross Show, Trip Hazard and The Last Leg in Tokyo. She has written for the hit Netflix series Sex Education, had a recurring guest role in Casualty and published her first book, The Amazing Edie Eckhart, in 2021.

“It feels really emotional and I’ve already seen a lot of familiar faces from my time here, so I’m very happy to be home,” she told the University website.

“It’s a massive honour, because I hold Huddersfield very close to my heart. It’s just amazing that you remember me. But secretly, I’m not allowed to say this, but I’m most excited about changing all my deliveries to Dr Rosie. The power!

“I’m actually already a nightmare, even to my friends. I’m warning them and saying ‘just so you know, you’re going to have to call me Dr Jones.’ I think Huddersfield was the first place that I thought right I can be a writer and I’m going to bloody do this.

“I studied creative writing and I had my first short story published when I was a student here and that just gave me the taste for it. I mean, I’m so lucky to be able to perform comedy and then do serious acting roles, but if I’m honest writing scripts and books are the things that give me the most joy and I really found the writer in me when I was here at university.

“Growing up being a gay, disabled woman, I would read a book or turn on the TV and never see myself staring back. I don’t feel like I ever had a role model. So, when I started to get a platform, I was aware that I wanted to be as vocal as I could about my disability and my sexuality and just be that person that other people can look at and think ‘if she can do it, I can do it’.

“I’m very aware that when I go out there and I say ‘here’s my experience’, you may have a different one, but if you want to listen to me, learn from me and be inspired by me, good, but at the end of the day I’m just Rosie.”

The other recipients of honorary doctorates were: