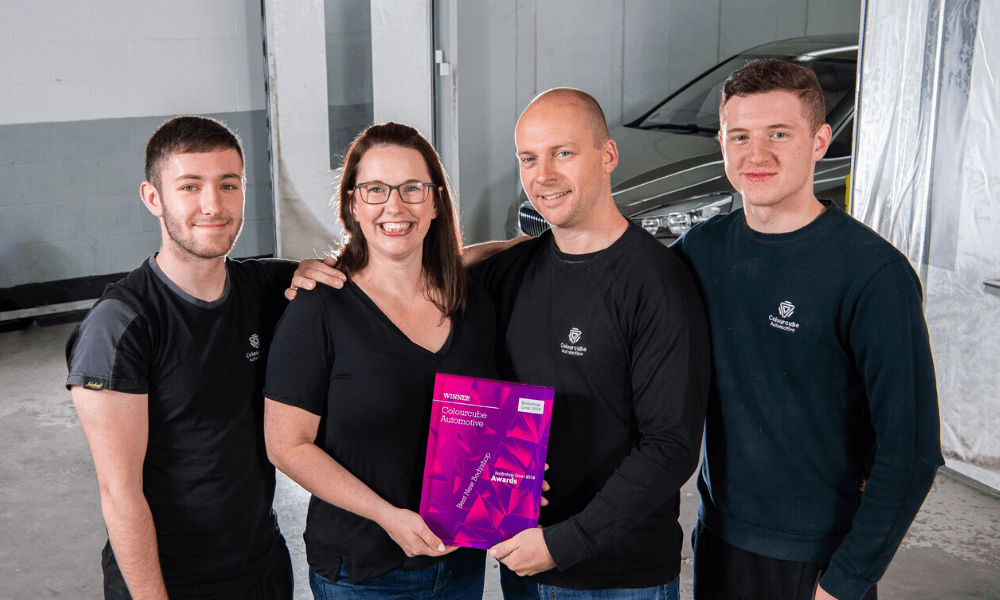 By @Management 30th October 2019 No Comments

An independent, family-run automotive Bodyshop based in Huddersfield proved its credentials in this year’s national bodyshop Live! 2019 Awards to earn the coveted title of “Best New Bodyshop”.

The annual UK-wide industry awards event – held last month, saw several well-known automotive brands such as Volkswagen and BMW shortlisted for different award categories. Colourcube held their own as both the smallest business in attendance and nominated for an award.

The owners of Colourcube Automotive, Mike and Liz Mayes are a husband and wife team who opened their Lepton Bodyshop in 2016 – continuing to lead the business to success ever since. Mike is the Director and Liz the Business Manager, who work alongside two apprentices. Colourcube offers a range of accident repair services such as end of lease refurbishment, alloy wheel refurbishment, dent removal and full resprays.

Colourcube Automotive was shortlisted alongside larger Southern Bodyshop’s, including Alpha Rapid Repair and Artis Accident Care in the Best New Bodyshop category and were thrilled to be announced as their category winners.

Mike and Liz deal directly with customers and pride themselves in offering a personal and accessible service. Colourcube Automotive provides a uniquely high-quality finish which sets them apart from other independent Bodyshop’s and replicates those of approved repairers, ensuring only the best techniques and equipment are adopted to repair and respray customer vehicles.

The Colourcube Automotive facility is complete with an onsite spray oven and water-based mixing system – equipment normally only seen in much larger operations. The duo also takes health & safety incredibly seriously – investing in specialist, high-quality equipment to minimise pollution, the risk for employees and the impact on the environment.

Mike’s industry reputation is far-reaching, and during his career as a senior painter, he’s repaired the vehicles of a famous TV chef, as well as several sports stars. Mike was a senior accredited ATA painter at Mercedes Benz, Jaguar and Porsche-approved Bodyshop’s for over 20 years before taking the leap to move to Yorkshire and launching the business with Liz.

Mike explained: “Winning this award has been the icing on the cake for us. Previous Bodyshop’s I’ve worked for have won national awards like this in the past and it’s an honour to now win one ourselves. We’ve earned a great reputation in our local area, so to receive national accreditation and industry recognition is a great achievement.”

Liz and Mike’s future plans are to continue the success they’ve achieved so far by making key investments into their facility, equipment and team members.