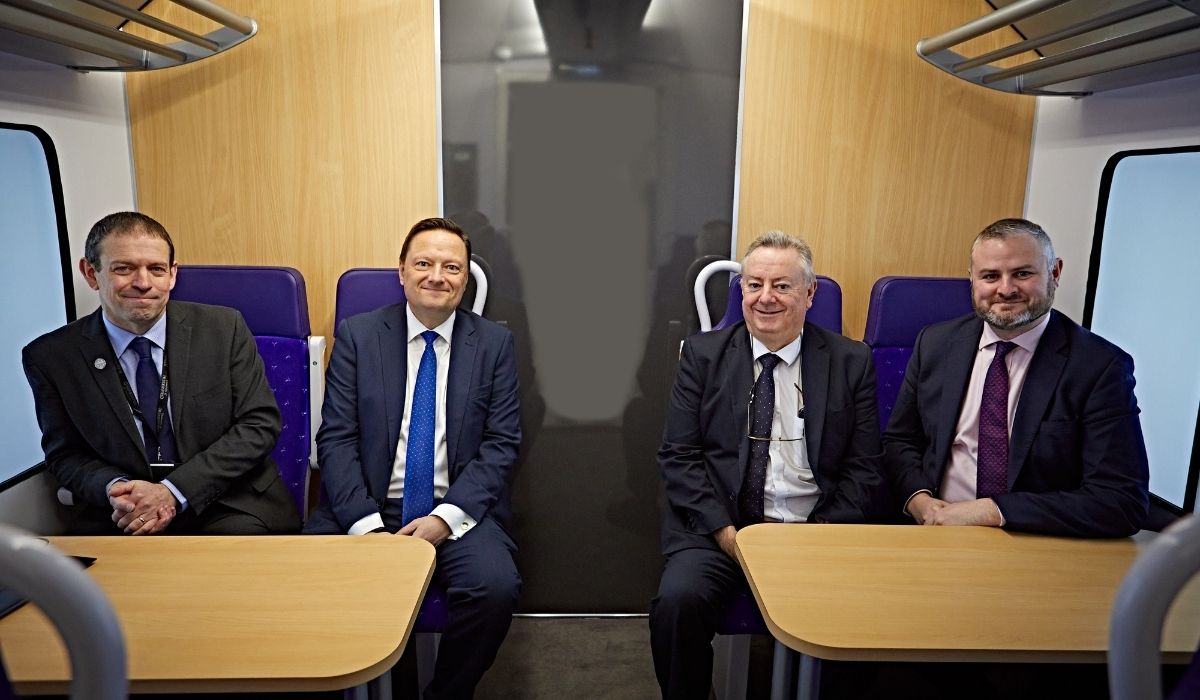 THE Minister of State for Transport, Andrew Stephenson MP, visited the Institute of Railway Research (IRR) at the University of Huddersfield.

During the visit he officially launched the IRR’s new test facilities within the Centre of Excellence in Rolling Stock, which is part of the UK Rail Research and Innovation Network (UKRRIN).

During the tour he was provided with the opportunity to experience a live onboard demonstration of THOMoS, the IRR’s new ‘Train Hi-fidelity On-board Motion Simulator’.

The Transport Minister was welcomed to the campus by the University’s Vice-Chancellor, Professor Bob Cryan.

“We are very excited to be a part of the UK Rail Research and Innovation Network,” said Professor Cryan. “It was an absolute pleasure to be able to welcome the Minister of State for Transport, Andrew Stephenson MP and show him some of the excellent facilities we have here at the Institute,” he added.

During his speech Andrew Stephenson MP commented on how the work carried out by the IRR was helping to improve the passenger experience, reduce rail emissions, and support a modernised workforce.  He also regarded the Institute of Railway Research to be ‘at the heart of rail innovation’.

Professor Simon Iwnicki, Director of the IRR, outlined how the new UKRRIN facilities would support the research being conducted at the Institute. He pointed out how the new test rigs would allow further innovations to be developed and implemented which would improve the performance of railway vehicles and result in reduced cost and carbon emissions.

The Institute of Railway Research (IRR) has built up a worldwide reputation for its research into the interaction between railway vehicles and the track.  It has used this improved knowledge to support the railway industry in the UK and around the world.

The Institute has participated in many projects with industry and academic partners which have led to significant developments, innovations, and practical applications.  This work has attracted major investments in world-class equipment.

In 2019, the IRR received a coveted Queen’s Anniversary Prize “for research and development that has brought significant improvements to the railway industry”.

The IRR’s Centre of Excellence in Rolling Stock (CERS) was officially launched at the University in 2019 and shared a total of £90 million in funding, distributed among three Centres of Excellence, from the Government and from private industry through the UK Rail Research and Innovation Network (UKRRIN).

UKRRIN is made up of a network of leading universities and industry partners and has provided a step-change in innovation within the railway sector by increasing the speed at which new technologies and products progress from the R&D stage through to entering market applications globally.

The University’s Centre of Excellence in Rolling Stock (CERS) links with three other Centres of Excellence within the UKRRIN Network to provide a ‘one-stop shop’ for all rolling stock development.

Through collaboration and knowledge transfer the Centres of Excellence help the UK to maintain its position on the world stage as a technology leader in rail.

The funds invested in creating the Centre of Excellence in Rolling Stock at the University has led to the construction of two major new research facilities at the Institute.

The ‘PANTHER’ £3.5 million ‘High Speed Pantograph Testing Rig’ is a unique full-scale pantograph dynamic test rig with hardware-in-the-loop (HiL) facility for determination of dynamic interaction forces. Typical applications will be the development and assessment of new pantograph designs, the optimisation of pantograph suspension systems and the development of novel mechatronic solutions.

A £1.2 million ‘Train Hi-fidelity On-board Motion Simulator’ known as ‘THOMoS’ is a motion platform-based laboratory simulator capable of reproducing the motions and sensations rail passengers experience when on-board a train.  The simulator will be used to carry out research into passenger comfort and the effect of various novel vehicle designs.