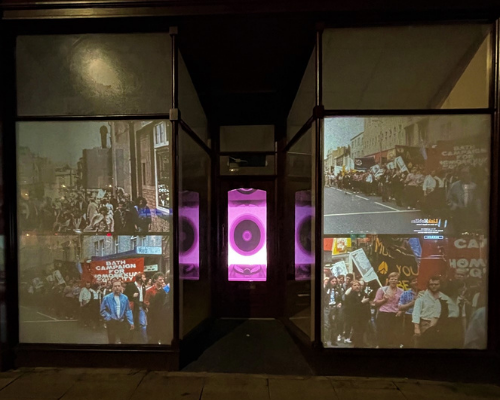 By @Management 4th February 2022 No Comments

As part of LGBT+ History Month a shop in Huddersfield Town Centre is being used for a unique exhibition which remembers when Pride came to Huddersfield in 1981.

The Gemini Club was opened in 1976 in Huddersfield and became a popular nightclub for gay and bisexual men. The club was often targeted unfairly and so, in a show of solidarity, the organisers of Pride moved it from London to Huddersfield creating the UK’s first National Pride.

One of the original shops on the Pride march route, 8 New Street, has been converted into a pop-up gallery. West Yorkshire Archive Service are holding a launch event and submission day where they want to collect photos, banners, posters, badges, and any other archives from the historic day.

The launch event will take place on Saturday 5 February from 11am – 4pm and people can add their items to the archive or include with the option to have items scanned and returned on the spot.

A four-minute film has been made using recovered pictures, some new portraits of local LGBT+ people taken by internationally renowned artists Ajamu X, and some specially commissioned animations. The films tells the story of when Pride came to Huddersfield in 1981 and will be projected on to the windows in the shop from 7am-7pm throughout LGBT+ History Month.

“As this year’s LGBT+ History Month starts, I’m so pleased we’ve been able to repurpose 8 New Street to share this film to commemorate the 1981 Pride march. I’m delighted that anyone walking along New Street will be able to be a part of celebrating this unique piece of – often forgotten – Huddersfield history.”

The events have been made possible by funding from the Arts Council of England, Kirklees Council and LGBT+ History Month UK.

“This excellent film really gives a sense of actually being on the march and everything it stood for.  And it’s just a part of this extraordinary project.  The first national Pride in Huddersfield in 1981 is a wonderful piece of forgotten history that needs to be known across the UK.”

“It’s very special to me to be able to take these portraits celebrating the hidden queer history of my hometown.  It’s so moving to know some of my work is there now on New Street not far away from where I stood as a 17-year-old, watching the Pride 1981 march go by.”