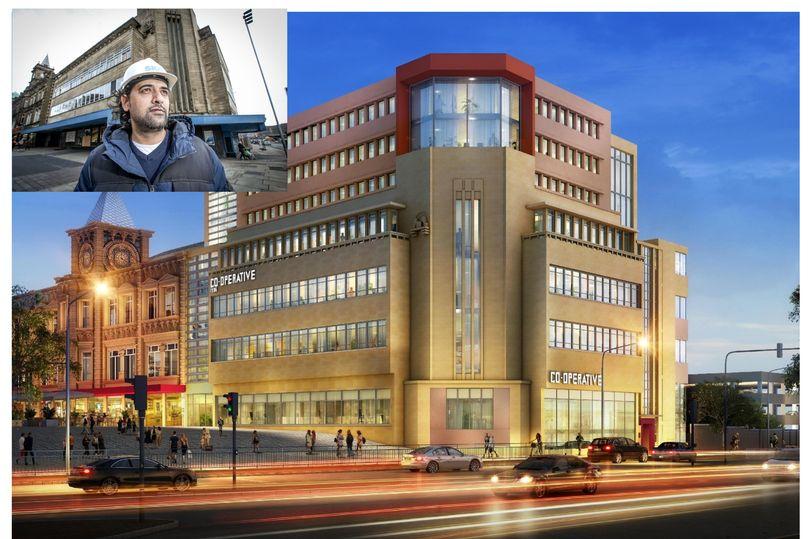 The pigeons have been evicted and the Heaven & Hell branding torn down as the much-anticipated face-lift of the crumbling Co-op building begins to take shape.

More than 18 months on from our first look around the dilapidated premises, ExaminerLive was allowed back inside to see the ongoing project to transform the building into luxury student flats.

The near-derelict building at the end of New Street, most famous for hosting the Heaven and Hell nightclub in the 1990s, has been one of Huddersfield’s most talked about eyesores over the past decade.

After more than a year of delays surrounding planning regulations, work finally began over the summer to strip the neglected building back to its shell.

And with that phase almost complete, SKA Developments say they will soon be able to start the construction and refit process with a view to launching the finished building, dubbed Renaissance Works, in June 2021 – just in time for the student intake of 2021/22.

The finished project will see three extra floors added to the top of the current block to create a 135-bed property.

Engineers and builders from Huddersfield based Big Red Construction and Spring are currently preparing to take the current roof off and will then add a concrete deck on the top floor before building the three new floors on top of the 1930s built extension to the original Victorian property.

Managing director of SKA Developments, Zeb Pervaiz, has almost single-handedly been regenerating Huddersfield town centre, having done a number of refurb projects on disused premises around town, including Standard House and the former Thatcher’s building on Dundas Street.

They also have a huge project at Huddersfield Waterfront in the pipeline.

He said: “We take old buildings and re-purpose them. That’s not something everybody likes doing.

“We’ve got a good record and this is our fifth project. Otherwise, those buildings wouldn’t get used.”

On the year-long delay in getting started, he added: “We try to future proof everything so it’s better for us to wait and do it properly.

“We had to take a bit of time but we’re here now and we’re going to crack on.”

Zeb couldn’t be drawn on what the project is going to cost in total but a Kirklees Council loan, thought to be in the region of £10m, is being used to to kick-start the project.

Zeb said they “would not cut corners” in a bid to create one of the best properties in town.

He added: “If we’re going to do something we do it right and we do it justice.

“For me old buildings do it for me as I like to bring the character out, and this is one of them.”

The upscale student accommodation is going to give students all mod-cons including big-screen TVs, dishwashers, and fully kitted out kitchens.

Clr Peter McBride: “This is one of the key planks in the overall strategy for the Huddersfield Blueprint.

“There’s improvement to Cross Church Street, to New Street, the bus station and the rail station.

“These are key things that are going to happen within the next nine months.”

Clr McBride said the were plans to boost the amount of town centre accommodation, not just for student but for young professionals.

And he said he was confident the new Conservative government would open up new funding streams to allow the council to give the town centre the cash injection it so badly needs.

Image and press release are taken from Yorkshire Live.