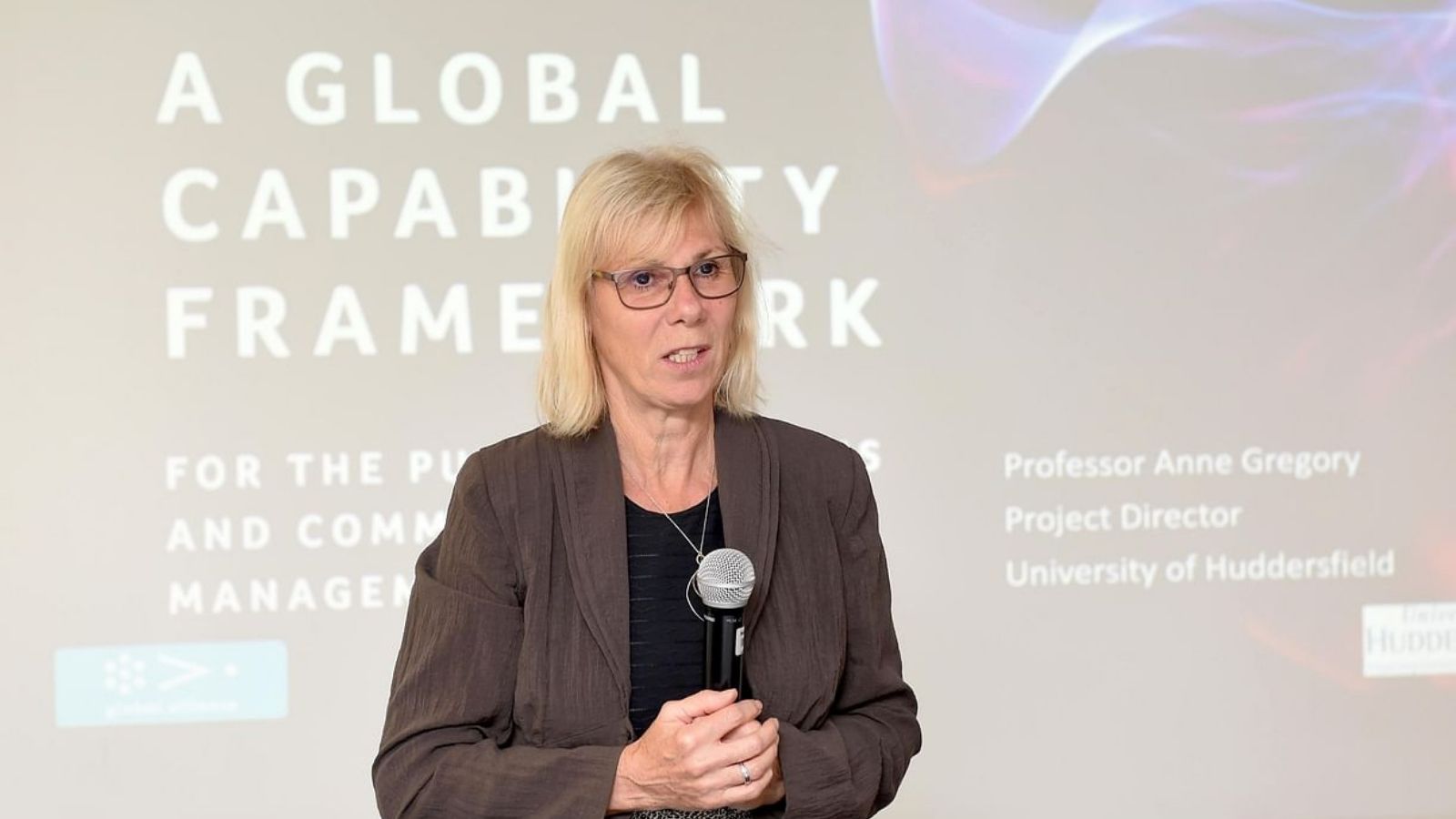 By @Management 11th October 2021 No Comments

A world-renowed expert in public relations at the University of Huddersfield has been conferred two prestigious international awards for her achievements and ground-breaking work that has led to advancements in the public relations industry on a global scale.

The Atlas Lifetime Achievement Award from the PRSA is in honour of Professor Gregory’s contributions to the research and global practice of public relations and whose exemplary service has been recognised by the Society within the public relations profession.

The award is conferred only in exceptional circumstances and is rarely awarded to non-American recipients, thus making Professor Gregory’s achievement all the more significant.

Professor Gregory’s career highlights include being President of the Chartered Institute of Public Relations (CIPR) in 2004, which under her leadership obtained chartered status.

During her term as President, Professor Gregory was among the first to introduce initiatives to tackle the problem of diversity after she had recognised there was an issue within the industry as a whole.

“I knew there was a problem with our industry not being diverse enough: it was very white, middle class and with virtually no people with disabilities. It was clearly an issue, and we are still trying to tackle the issue today.” she said.

Professor Gregory went on to be Chair of the Global Alliance for Public Relations and Communication Management (GA) in 2013 – 2015, the confederation of the world’s major PR institutions and communication management associations, representing over 320,000 professionals worldwide.

She was one of the authors of the Melbourne Mandate and the Stockholm Accords. These were global initiatives on the role of public relations in organisations and her books and writings are widely recognised as having guided and enhanced the profession over many years.

Professor Gregory is a Reviewer of Government Communication appointed by the UK’s Prime Minister’s and Cabinet Office and a member of the CIPR’s #AI in PR Panel, leading work on the global impact of AI on public relations.  This has resulted in the world first guide addressing the ethical implications of using AI in PR work.

A Professor of Corporate Communication, Anne Gregory is recognised by her peers as a true internationalist. She teaches and advises around the world on public relations leadership, planning, ethics, evaluation and capability, including for the UK Government, the European Union, in Australasia, Scandinavia, Asia, Africa and Europe.

The University’s Vice-Chancellor Professor Bob Cryan was delighted when he heard the news about the awards.

“As Vice-Chancellor of a University with a focus on ‘Inspiring Global Professionals’ I am absolutely delighted that our Professor Anne Gregory has received not one, but two incredibly prestigious global awards in recognition of her outstanding and extraordinary contributions to the practice and profession of public relations internationally.

“This is wonderful recognition of the exemplary and world-leading work that Anne has carried out over the years and all of her colleagues and students at the University of Huddersfield are tremendously proud of her.”

Another of Professor Gregory’s achievements is the Global Capabilities Framework.  She directed this global project, working with academics and practitioners worldwide, to create the profession’s first Capability Framework. It scopes and defines the range of roles and responsibilities practitioners have and is used by professional associations, companies, individuals and academics.

The Framework uses an innovative software tool, developed by University of Huddersfield graduates, that allows public relations professionals to benchmark their skills and capabilities and compare themselves to the global standard.

The Canadian researcher for the Global Capabilities Framework was Professor Amy Thurlow, from Mount Saint Vincent University and it was for their joint work that CPRS announced the pair as recipients of the CPRS’s 2021 Outstanding Achievement Award.  The Canadian Public Relations Society (CPRS) adopted the Framework and software this year.

Professor Gregory said she was wholly aware decisions such as these were not made lightly, particularly since this was the first time the Award was made to a non-Canadian, so to be conferred the Outstanding Achievement Award by the CPRS was a huge honour.

“I feel like an honorary Canadian by receiving this award, which fills me with pride. The CPRS is known for its high standards, and it’s difficult for me to say just how grateful I am,” said Professor Gregory.

“Amy and her Canadian colleagues were part of a larger team of researchers who worked on the Global Capabilities Project. They came from every inhabited continent and, along with the practitioner community, including CPRS members, we were able to put together a framework that is changing our professional community as it is used by practitioners, organisations and professional institutions around the world,” she said.

“It’s been a real privilege for me to work with Anne on this project and in other capacities as our paths have crossed over the years,” added Professor Thurlow. “Her passion and commitment to the advancement of the public relations profession is contagious.”

Additional awards received throughout Professor Gregory’s career include the ‘Sir Stephen Tallents Medal’ for her outstanding contribution to the profession, the Institute for Public Relations ‘Distinguished Pathfinder Award’ for research and the ‘Premio Internacional Award’, from the Portuguese Business Communication Association, for exceptional contribution to unify the public relations profession worldwide.