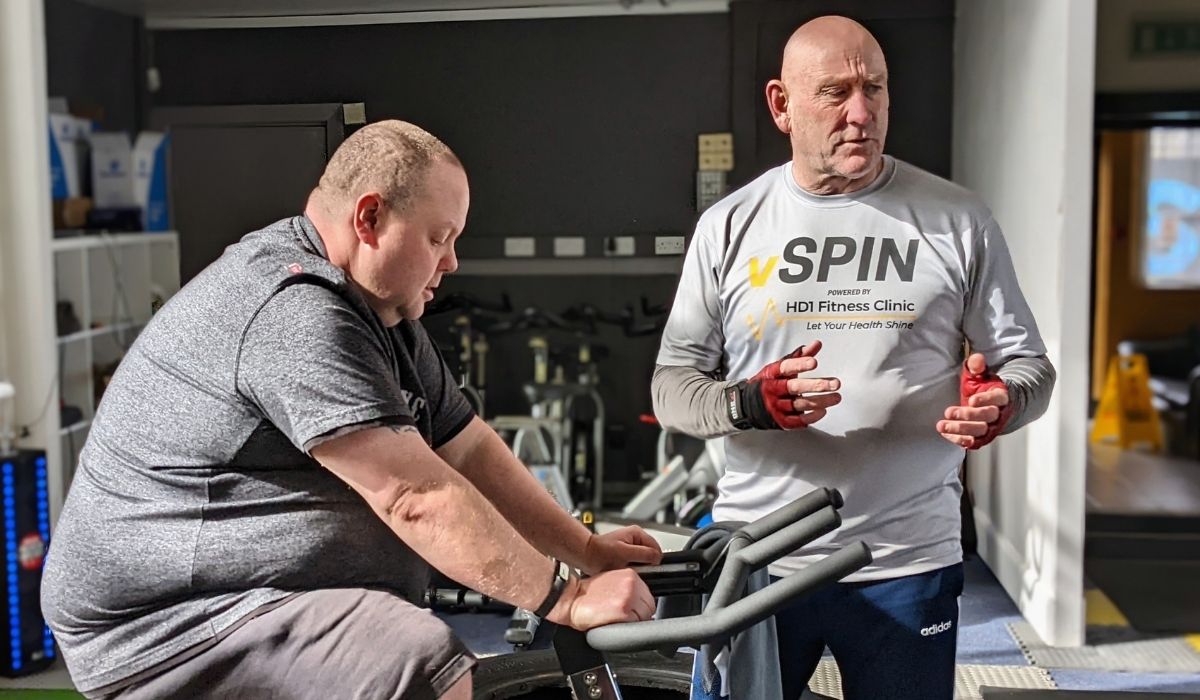 A unique new wellness enterprise born in Huddersfield is celebrating a year of helping local people transform their health – and their lives.

wellnessAction! is the creation of experienced wellness coach Trevor Seymour, who also operates the popular HD1 Fitness suite on Old Leeds Road on the edge of Huddersfield town centre.

Through the initiative, Trevor works closely with local NHS GPs to engage with those ready to take their first steps towards fighting conditions such as obesity, high blood pressure and type-2 diabetes, and leading a healthier life.

The service is delivered completely free of charge to anybody who needs it, including those referred by their GP, or others who simply walk through the door and ask for help.

Throughout the last year, as the whole of the UK has battled the effects of a global pandemic, wellnessAction! has delivered a transformative impact to more than 250 local people through regular sessions held on-site at HD1 Fitness.

Trevor explains: “It all started at the height of lockdown, really.

“We’ve got this network, the place to exercise, the sports massage stuff, but I thought about how we could properly help the community.

“This wasn’t going to be about big biceps or 200m sprints, it’s about doing good in people’s lives, at a time when so many people were struggling with isolation, with having families torn away and to an extent having their identities taken from them.

“The upshot of that for a lot of people was a big hit to their health, with eating habits suffering, and walking and active routines completely turned upside down.

“We wanted to change all of that in our own way, and I think we’ve done that for a lot of people during our short existence.”

wellnessAction! Is registered as a Community Interest Company (CIC), and relies entirely on donations and grants to operate, with no income made through charges to users of its vital services.

Trevor explained: “We’ve very quickly built the team, the expertise and the structures to create a healthy, happy and welcoming environment for people who may never have set foot in a gym before.

“And I suppose that’s the first thing to make clear. This is not a gym. It’s a community of people who support one another.

“There are perceptions of loud music, charged atmospheres, even intimidation – but that’s not what this is about. You could say we’re a place to exercise for people who hate gyms, although I think we’re actually so much more than that.”

The 250-plus local people who Trevor has personally supported during wellnessAction!’s first year in operation each have their own unique challenges.

Trevor says: “I’ve got an 85-year-old gentleman who comes in. He arrived at the door with a walking stick, could hardly see a thing and was tripping up the steps on his way in.

“I helped him inside and had a chat with him and his partner, and we put a plan in place together.

“He’s been with us a year and he’s come on leaps and bounds. He’s much more mobile, confident and generally has much more freedom than he had previously.

“He’s told me himself how much better he feels, he says he can move, and that sort of feedback is just fuel for my fire.

“Today, he’s here two to three days a week with the other people here that he knows, sharing in the camaraderie and essentially doing things that will help him to enhance and extend the quality of his life.

“We have another chap in here who’s struggling with an alcohol problem. He comes here, hops on a bike and talks to people about his issues, while there’s another lady who arrived here in a wheelchair.

“I asked her if she was registered as disabled. She wasn’t, so I asked her why she was using the wheelchair, and she told me it was a bad knee that was causing a problem.

“I asked her why she was limping – ‘did it hurt?’. She said it didn’t but it was just a habit. It was purely psychological, and it simply needed somebody to talk to her and support her.”

But perhaps Trevor’s biggest success story has come through his work with a young man called Danny, who was introduced to the service by his mum.

Danny lived more than 60 miles away, in Nottingham, but Trevor quickly put a solution in place to ensure he could receive the support he needed.

“His mum was coming here and told me about some of the mental health issues her son had been suffering with, while he was also struggling with his weight, to the point where he was getting heavier by the day.

“The additional curveball here was that he lived in Nottingham, and there was nothing for him down there, so we had to come up with a logistical solution.

“That solution was for him to stay at his mum’s house, but come down to me for five days a week, working for the wider business, and participating in the programme.

“As a result, he’s lost two stone and we’re slowly helping him with his issues around depression. He’s like a new man.

“He was heading down a pretty dark path, especially with the issues with his blood pressure, but he’s in a good place now, and he’s still using our facilities.

“We’re transitioning to a scenario where there are things he can also do from home, which is all part of that philosophy of giving people the tools they need to lead healthier lives themselves.”

Trevor adds: “We’re proud to have been able to help somebody who lives so far away, through a bit of logistical creativity, but unfortunately it is the case that there isn’t anything else like this anywhere else.

“And whilst I feel a sense of pride that we are an innovator in that sense, I do truly believe there is scope for this concept to be rolled out nationwide. I think it could be massive.

“That’s my biggest ambition, that this concept, born in Huddersfield, can be the start of something much bigger, able to help even more people.”